LCHR on Venezuela: a man-made humanitarian and human rights catastrophe 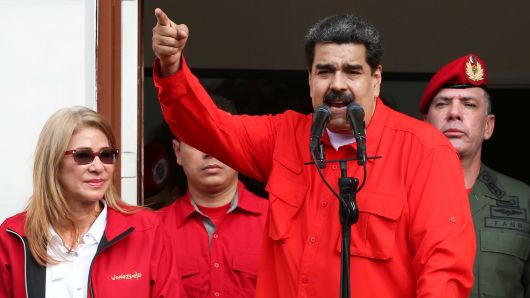 As the world divides over its support for the declared leaders of Venezuela, what is happening to its people?

Venezuela was once the richest country in Latin America. It is home to the largest known oil reserves in the world; more than Saudi Arabia. In 2013, it received an award from the UN for reducing hunger by half. Yet today, its simultaneous humanitarian and human rights crises have led to over 3 million people fleeing the country while those left within its borders face life-threatening conditions.

A rapidly deteriorating economy is set to see inflation rise to 10 million per cent in 2019. Even where food can be found, the prices have exceeded all realms of rationality, with one month’s salary now buying only 500g of oats, 24 eggs, or half a burger. The country is also severely lacking basic necessities and medicine. All of this has culminated in a humanitarian crisis, which is exacerbated by a repressive government that continues to crack down on dissenting voices.

Unlike many humanitarian crises in the world, Venezuela’s was not caused by war or natural disaster. This crisis is entirely man-made.

The current (and now illegitimate) leader of Venezuela, Nicolás Maduro, was hand selected by his predecessor, Hugo Chavez, before his death in 2013. Chavez was a charismatic and beloved leader, who blamed Venezuela’s old, corrupt elite for the country’s inequality. He campaigned for a fairer society which won over the Venezuelan poor who swept him into power in 1999. In 2004, following a surge in oil prices, Chavez’s oil-reliant economy boomed, and he invested billions into social welfare, food subsidies, education, and healthcare.

But the economy became dependent on oil and was unable to survive a crash in oil prices in 2010. In an attempt to keep his voters happy, and keep himself in power, Chavez rigged the currency system, and continued to spend excessively leading to a spiraling deficit.

Following Chavez’s death, and just a year into Maduro’s presidency, oil prices plummeted again, and the economy was unable to cope. Venezuelan cities are now amongst the deadliest in the world. Hunger rates have tripled, and its infant mortality rate is increasing for the first time in 18 years. Nearly 85% of Venezuelans want Maduro and his government to be removed from power but he remains in control with support from the military.

In 2015, when the opposition won a two-thirds majority in the National Assembly, Maduro, fearing for his rule, forced out several Supreme Court judges and filled the positions with stooges loyal to him. The Supreme Court then preceded to strip the National Assembly of its powes. This sparked deadly nationwide protests. In 2017, Maduro then rewrote the Constitution and created a new body, the National Constituent Assembly. Although members of the public were able to vote on its members, the election was largely boycotted and widely acknowledged as being rigged.

Not only does this new body have the power to rewrite the Constitution, it has also effectively replaced the National Assembly leaving virtually no opposition to Maduro’s rule.

Although Chavez, outspokenly opposed to corruption, did little to practically resolve the issues, Maduro is doing much to exacerbate them. He, like Chavez, has rigged the economy to keep himself in power. Yet, whereas Chavez needed the poor to retain his presidency and so continued to spend on them, Maduro relies on the military instead.

Maduro is exploiting a complex currency system installed by Chavez, whereby he has fixed the rate of the bolivar to ten bolivars to one US dollar, but only the military and his closest allies can access this rate. The rest of the country is struck by hyperinflation that has left Venezuelan currency near worthless. Maduro has also handed over control of food supplies to the military, allowing them to exploit their economic advantage, buying food on the Maduro rate and selling it on the black market for heavy profits to a starving population.

Whilst democracy diminishes, the people of Venezuela are undergoing severe repression of their rights. Serious human rights violations are being carried out, and the authorities are failing to hold perpetrators to account. These include extrajudicial killings, excessive force, arbitrary detention, torture, inhumane prison conditions, and ill-treatment.

In May, Maduro won the presidential elections against an opposition that has been weakened by years of repression, and amid allegations that the polls had not met international standards of freedom and fairness. The National Assembly then declared in January of this year that Maduro’s re-election was invalid, and declared its president, Juan Guaidó, as acting president until a free and fair election is held.

However, in response, the Supreme Court has ruled that the National Assembly’s declaration is unconstitutional. Within Venezuela, there remains no independent government bodies to act as a check on Maduro’s power as his rule becomes increasingly authoritarian.

People in Venezuela are starving and cannot afford basic medicine for their children. They are also being severely repressed, in attempts to stifle dissent by a regime that has shown no plans for economic or human rights reform.

Can the international community allow this to continue? Is declaring sides really enough for the people suffering?