We have asked all of the Leadership and Deputy Leadership Candidates to provide a short statement on their approach to human rights. Below is the statement from Angela Rayner MP.

The European Convention of Human Rights was established to protect the rights of all European citizens and I’m proud a Labour government enshrined it as the Human Rights Act. That Act helped get justice for the families of the Hillsborough disaster; stopped the arbitrary separation of elderly couples going into care; and ensured public sector workers, including those I led as a Unison activist, could organise without facing discrimination.

But for 10 years, the Conservatives have attacked our workplace rights, drastically cut legal aid and created a hostile environment where human rights are forgotten. In Opposition, we have to defend human rights and ensure the Tories do not replace the HRA with a meaningless ‘Bill of Rights’.

The dismantling of Legal Aid has devastated the lives of so many. As a local MP, I’ve stood up for constituents who felt powerless in the face of multinational corporations or powerful interests. Laws are useless if people can’t afford to enforce them. We have to push to restore legal aid because it is right, but also makes economic sense: if people had early access to legal advice we’d save on costly legal cases later.

As Shadow Education Secretary, I advocated free education as a basic human right, a principle enshrined in our draft Charter for the National Education Service – a new ‘universal basic service’. Lifelong learning can transform lives and put power back into people’s hands. As I put it in my Conference speech, that’s my view of education: a human right, for human gain.

I ensured we committed to enshrine the UN Convention on the Rights of the Child into domestic law as part of a new approach to children’s policy, and embedded food rights too, with free healthy breakfasts and lunch provided through schools and plans to tackle hunger over holidays.

I hope we can build on those ideas, as we did with education. I’ve taken a similar view on other policies issues, for example housing – as a teenage mum, a council house was critical to turning my own life around.

I’ve always believed that as a Party, our values need to inspire our approach to foreign policy and that human rights should be at its heart. This means supporting a fair international rules-based system which promotes peace and protects our security. I believe our future role in the world must be exporting the means to save lives, not take them, by tackling climate change that threatens us all. I can wholeheartedly commit to supporting approaches that reflect the values of our Party internationally.

We need a Deputy Leader who can unite our Party and get us ready to defend our values and human rights against a Tory onslaught. We need to reconnect with our communities, rebuild our movement and make the case for a more equal and just society in Parliament and in our communities. As your Deputy Leader I would work night and day to do that.

We are delighted that Angela Rayner has signed up to our Human Rights Pledge. 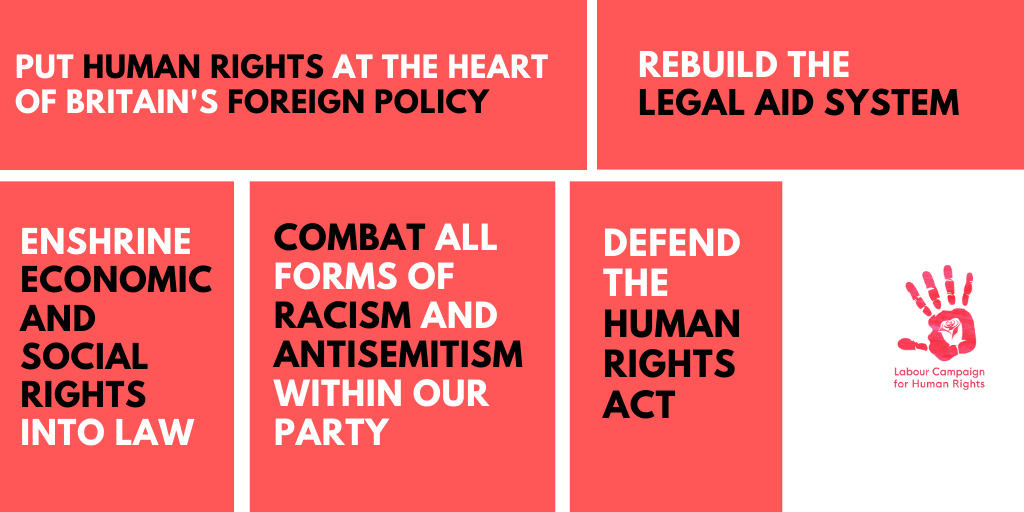