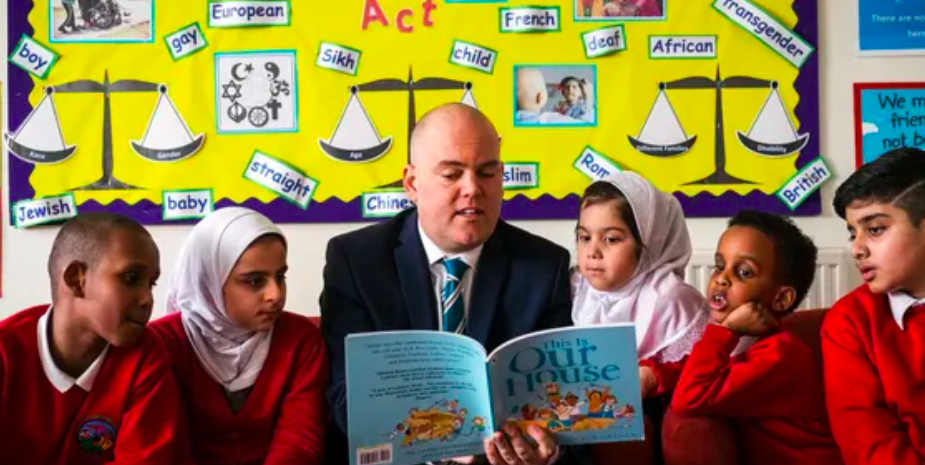 This article was written by Peter Turay, Communications Officer at the Labour Campaign for Human Rights, and originally published in The Times on 21 March 2019.

Over the past few weeks Birmingham has seen angry protests by parents outside a school, armed with aggressive placards and a megaphone. You could be mistaken for thinking this was a scene from Westminster which is plagued with protesters, both Remain and Leave, shouting at MPs (and anyone else unfortunate enough to walk past).

Instead, this protest was held outside Parkfield Community School in Birmingham, which has drawn criticism from parents for the introduction of their “no outsiders” programme to the school’s curriculum. The programme aims to promote social cohesion, by teaching the children about equality and helping them learn to be tolerant of differences, including sexual orientation. Unfortunately, this has sparked anger among some parents and conservative religious groups in the local community.

The rhetoric being used by these groups — many of whom are parents of the schoolchildren — has been alarming and dangerous. One chant repeated last week by parents, in front of children as young as four, went: “Telling people that it is OK [to be gay] Shame. Shame. Shame.”

The effect that these kinds of protests could have on the minds of young LGBT people across the UK is truly heartbreaking. Stonewall recently revealed that over half of LGBT people in the UK had suffered from depression in the last year, while three in five suffered from anxiety. Moreover, a recent government report found that 40 per cent of LGBT respondents to their survey had experienced an incident of verbal or physical harassment within the last 12 months. Incidents like those outside Parkfield Community School last week can only make these figures worse.

In a country where we promote the importance of having an inclusive, progressive and kind society, teaching acceptance and understanding of same-sex relationships and LGBT identities is crucial to helping young people understand their own feelings and experiences. To ensure that no young person believes that they are different or abnormal or weird for simply being who they are. This kind of education will also help others to identify and tackle prejudice from an early age, readying our next generation of citizens to call out homophobia wherever they see it. It also takes us one step closer to a society where we not only accept the differences in people all around us, but we celebrate them.

Over the past decade, social approval of LGBT rights has risen rapidly. For example, the proportion of the British public who say they approve of same-sex partnerships has risen from a low of 11 per cent in 1987 to 64 per cent in 2016 according to surveys from the National Centre for Social Research.

We’ve also seen huge political progress being made. In 2000 the ban on gay and bisexual people serving in the armed forces was lifted. In 2002 same-sex couples were given equal rights to adopt. In 2003 Tony Blair’s Labour government repealed the appalling Section 28 of the Local Government Act 1988 – ending the legislation’s role in institutional discrimination against the LGBT community. In 2004 legislation allowing civil partnerships was written into law. In 2007 discrimination on the basis of sexual orientation was banned. And in 2014 gay marriage became a legal right in England, Wales and Scotland.

The scenes at Parkfield Community School in the past few weeks serve to act as a reminder to us all. Progress is still not complete. There is still more to be done.

The views of these protestors belong in a bygone generation, and we must not allow these incidents to become an opportunity for those who want to divide our community and turn the clock back on human rights. We must stand together and double down on opposing bigotry and hate speech, whenever we see it, and against whoever expresses it.

Peter Turay is Communications Officer at the Labour Campaign for Human Rights.